El Salvador, A War Story With a Reunion

One of the greatest blessings in life next to family is good friends. I had the honor to serve in El Salvador right at the end of the 12-year Civil War

We were there to do an HCA, or Humanitarian Civic Assistance as it was called then. Our job was to build a school, put in a water system and run a medical mission.

I was the senior medic at the time, up for promotion to SFC, or Sergeant First Class. That's a great privilege to earn as that rank requires Department of the Army approval.

Sadly, we had a Sergeant Major die while there. I was blessed to be with good medics and we were able to save his life and keep him alive long enough for his family to say goodbye. (His Obituary story is the 3rd one down from the top.)

There was a special thing in those days, called an OPAT. They were the special select 55, "Special Military Advisors" authorized by congress to be in the "Non-Declared War."

I was with one down there, a bit of a legend, we'll just call him, "Booger." We got shot at one evening while doing some work.  It was an interesting night.
Combat Infantryman Badge

I am still good friends with those men.  Boog and I talk regularly. But I haven't been able to see my other brothers in far too long. Trip still serves. Murray's son was a Hero.

We had drinks, made libations to the Fallen, remembered good times, and celebrated life. You can find them both here.  I was thankful to get to have reunions with many brothers and their families on this trip. I used to live and work there and was acting team sergeant for the counter-narcotics team for a while when it was brand new, working with DEA, FBI, and MD State Police. But those stories are for another time. For now, El Sal, Brothers, and Toast to the Fallen. 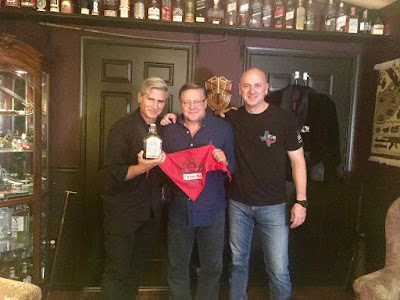 You can see more pictures from the reunion on my Facebook HERE
Posted by mykelhawke-survivingtogether.blogspot at 9:58 AM No comments: