Mykel Hawke is a huge proponent of education.  Having been kicked out of Junior High and subsequently earning his Masters, he is a huge supporter of everyone seeking higher education in all forms.

To show some of that support, he is sharing this from his niece, Cilla.  She was tasked to do a report on overcoming hardship and try to use family for it.  So she interviewed Mykel specifically on breaking the cycle of poverty as a teen. 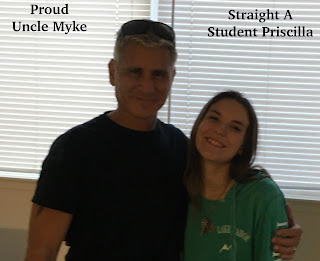 Mykel Hawke Interview by Niece "Cilla" on Poverty and Education


Cilla question #1)  What was it like for you growing up?

We grew up exceptionally poor, in part due to the fact that no one in the family had any higher education, which of course excluded many higher paying jobs and left most folks trying to survive on very little.  If both sides of your family come from other poor families, the net effect is often even more poverty.  This doesn't take away anything from a good home and loving family, it just means you're poor.

Cilla question #2)  What were some difficulties you faced?

When you're poor, the potential for most good jobs is almost non-existent.  You don't have the ability to make a resume, much less the clothes for a job and the thought of a car, phone and sometimes even a home simply don't exist as an option.  So it leaves mostly manual labor jobs or work where they provide a uniform and you can walk or bus to and from the job is about the most one can expect when poor.   In the old days we did not have cellular phones, and many folks didn't even have a phone at home.  Often we didn't even have a TV, maybe just a radio.  Computers and the Internet were not even invented--for us, they were "SciFi" things of the future!  That said, college was simply not an option or even a thought in most poor folks minds.  Unless your family was rich, poor people never went to college unless they were blessed to get some rare scholarship.  But even those were only given if you went to high school.  In the old days, many folks dropped out at 16 to go to work and if they were motivated, they would work hard at night for 6 months to a year to try and get a G.E.D.

Cilla question #3)  What were some responsibilities you had growing up?

It's funny to me to see how much things have changed, as a 50+ year-old man born in 1965.  We used to start working at 8-12 years old mowing lawns and raking leaves for folks in the neighborhood. Then when we got 14 we could work as dishwashers in restaurants or paper boys.  I used to do both as I could do the newspaper delivery route at 4 am, then go to school, and then work after school bussing tables of dirty dishes and washing them.  Dishwashers didn't exist for the most part in the mainstream back then.  On weekends, I would hustle food and drinks at Bingo Halls to old people smoking like chimneys, back when that was allowed, and would make tips for serving people.

Cilla question #4)  How did you overcome any challenges you had?

As I became a teenager, our economic status was more tangible and palpable. We could see who had money and who didn't by the clothes they wore and if they were clean or not.  Not everyone could afford a washer, and dryers were a luxury item of the rich.  I was in the Chess Club and a Straight "A" Student since elementary school.  My grades were so good, that I was asked to write stories and was let out of classes in 3rd grade to go down the hall and read my stories to the kids in 1st and 2nd grade. By 5th grade, I won the school-wide award for best stories and illustrations.  Despite all that, my poor clothes meant the "Preps" and "Jocks" (preppy kids with nice clothes and grades and athletic kids with the money to afford gym clothes and sports gear) would not talk to such a poor kid as me.  So I ended up hanging out with the poor kids.  They were great kids like any other and maybe in some ways better, as they knew they were judged and relied more on their word and deeds than their clothes and parents' money.   None the less, they did tend to get in trouble and I did end up as a sort of gang leader.  One day in 7th grade, we got into a big fight and some folks were seriously hurt.  The police and paramedics came.   Since I was in the middle, I got caught.  I was expelled from the last month of school and told I was going to have to repeat grade 7. I didn't feel that was fair, so I decided not to return to school.  I then began working at 16 at a Food Lion grocery store.  Since there were no other kids my age, it was easy to excel.  Looking back, I realize now it was likely my work ethic that helped me most. I quickly rose from bagger, to stocker, to checker to assistant manager!  They even brought me on the cash deposit runs to the bank, at 16!  They offered to pay for my GED and send me to college to be a manager.  At that point, while very grateful and honored, I knew I didn't want to be a Food Lion Manager.  I also realized if I wanted a car, a home, a real job with real money, I needed an education.

The only way available to me, as a poor, junior high school expel-lee, to get college paid for was to join the Army.  They didn't let high school drop outs join.  They also required drop outs to have a GED prior to joining.  However, the Army did let me take the test to see what my abilities were. Recruiters were always looking to get their numbers of recruits in the service each year.  In those days, it was called the ASVAB and is still called that today.  But now, the categories are different.  For my time, the score that mattered was the G.T. That means General Technical, and in some ways is comparable to an IQ test score--your basic smarts.  The requirement to join was at least a 50. 100 was considered very smart.  To be an Officer or Special Forces, the requirement was 110.   I was very fortunate in that despite missing all of high school (4 years) and having been out for 2 years already, and only being 16 years old, I still managed to get a GT score of 121 on the ASVAB.  So they were allowed two exceptions per year and I was allowed to join the Army.  I turned 17 on November 29th and two weeks later, on December 13th, 1982, I was in the Army.  As a result of that opportunity, I went on to get my GED, then my Bachelor's degree in Biology and my Master's in Psychology.  I went on to become a senior Special Forces Sergeant and then a Special Forces Officer.

So the point of the story is simple: work hard, try hard, study hard, and the chances are you will go far and do well and no matter what, trying to do your best will never hurt and always make you better off.
Posted by mykelhawke-survivingtogether.blogspot at 2:54 PM No comments: